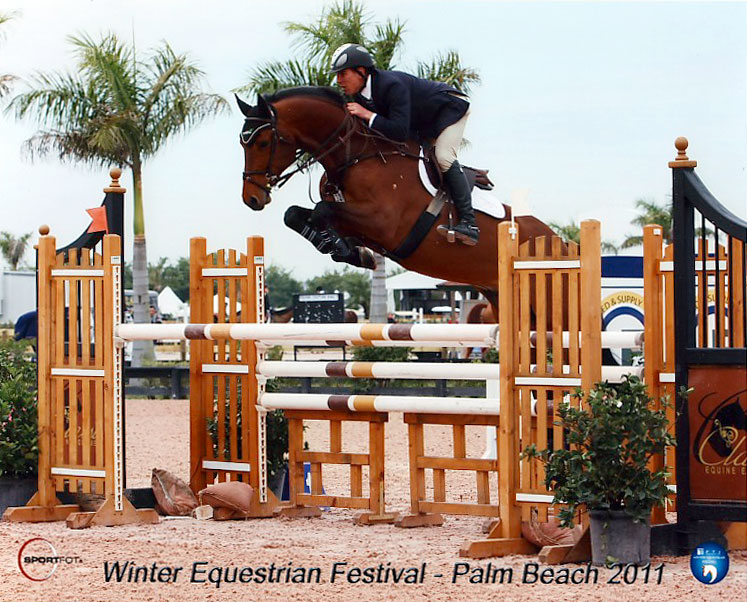 Congratulations to Maggie Savoie on her purchase of Carthano Z. Imported from Belgium, Carthano Z is a successful Grand Prix jumper. He is the product of a combination of the most well-established and reliable showjumping bloodlines in the world.

Sired by the top Holsteiner stallion CONTENDER, one of the most influential sons of Calypso II – who was an important transmitter of the heritage of Cor de la Bryère. Calypso II was an advanced level showjumper before retiring to stud where he sired a number of good jumping horses, and several top line dressage competitors.

CONTENDER is out of the Ramiro daughter, Gofine who was in turn by the great Thoroughbred sire, Ladykiller. Gofine produced several top showjumpers including the international performer Ulina (by Chicago) who competed with Susanne Behring, as well as Largo, Frechdachs and Florenza. Bred to Caletto I, Gofine produced Cornetto in 1989, who went on to be reserve champion of his stallion approval. A daughter of Gofine produced the stallions, Cassandro I & II. Cassandro I was a Danish Show champion, and as a gelding, was a successful jumper with Jerry Smit. Gofine’s daughter, M-Loreen (by Leander) when bred to Caletto I, produced two international competitors: Fine Kiss (Michel Robert) and Caliskan (Candice King).

CONTENDER won the 1987 Adelheidsdorf stallion performance test with a jumping index of 146.62. He went on to be the 1-b main premium vice-champion in Oldenburg on the basis of his excellent first crop of foals.He is now one of the most sought after stallions in Germany today. He has produced 80 approved sons, and 59 state premium mares including Riconda who won the Elite Mare Show at Rastede in 1993.

As of 2006, CONTENDER has produced more than 40 licensed sons, 782 registered mares and 498 successful offspring in the sport. An impressive number of his first foals went on to international careers: Niko (Geoff Billington). Copa d’Oro (Yves Houtackers) and Maria Callas (Ben Schröder) – there is also Herbert Blöcker’s eventer, Chicoletto.

CONTENDER has dominated German breeding values for many years now and continues to produce exciting young stallions like Contendro (premium stallion in the approval of 1999, and winner of the performance test at Adelheidsdorf the following year).Marco Kutscher is successfully riding three approved CONTENDER sons in international sport: Contreo, Conterno Grande and Montender (German Champion of 2003, bronze medallist at the Athens Games and European Champion 2005). Toni Hassmann won the German Showjumping Derby with Collin, whilst Checkmate won on the Rider’s Tour with Meredith Michaels-Beerbaum and was her ride at the European Championships.The licensed Holsteiner, Controe (out of Amalva by Aloube Z) has twice been runner up in major classes at CSIs in Stockholm and Amsterdam. Another Contender, the 2004 world champion of sires, Con Spirito R (dam, Galaune by Caletto I) is based in Switzerland and has been successfully competed.

CONTENDER was ranked third in the list of the world’s best showjumping sires in 2004.

CARTHANO’s dam, CATANIA Z, was sired by CARTHAGO Z, the son of Capitol I, one of the great modern Holsteiner showjumping sires. Unusually for a Holstein jumping sire, Capitol carried no Cor de la Bryère blood, but he was richly endowed with the heritage of two great Thoroughbred descendants of the Bay Ronald line – Cottage Son xx and Manometer xx, he also carried a double cross of the influential anglo-arab, Ramzes. Capitol I sired Cassini, Campione (and full brother, Cathleen, ridden by Meredith Michaels – now Beerbaum), Calato Z, Curtis (Mändli), Cliquot (Kirchof). With an index of 182 he head the FN young jumping stallion ratings. Capitol’s grand dam Retina was a Hamburg Jumping Derby with Fritz Thiedemann. His dam, Folia, showed great jumping potential herself, and produced the licensed stallions Latus I and II, as well as the two Capitols, and famous daughters Kausa, Lektion (eventing) and U-Capitola (dam of Lord Capitol). At his performance test, CARTHAGO Z earned a 9.5 for free jumping and a 10 for jumping talent. CARTHAGO Z finished in 11th place at the Atlanta Games with Jos Lanskink and the pair were members of the Dutch team at the Sydney Games. In all the combination competed in 15 Nations Cups.

CATANIA Z’s dam line goes back through the blood of the stallion Leonardo I to the mare Mechthild from the successful Holsteiner sport lineage 2067. The famous international show jumping horse Leonardo (Landmeister) is also bred out of Mechthild. Like the great sire Sandro Z, Mechthild is also a product of the successful combination of Sacramento Song xx with Wahnfried. This family also produced the international show jumping horses Sympatico (Sacramento Song xx), Gondoso (Gonzales), Cattani (Corrado I), Con Spirito (Contender), Cassandra (Capitol I), Leonidas (Lincoln) and Lordon (Lord).